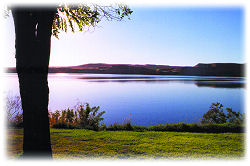 Sacagawea, although not the pathfinder of folklore, was a valued member of the Corps of Discovery. Here on the Snake River, as the group moved swiftly downstream, the leaders first noted Sacagawea's value as a symbol of peace. On Oct. 13, Clark wrote, "The wife of Shabono, our interpreter, we find reconciles all the Indians, as to our friendly intentions a woman with a party of men is a token of peace."

Three days later, the corps arrived at the confluence of the Snake and Columbia rivers, a traditional gathering place for many tribes. They spent three days here getting to know the native people, hunting, exploring and preparing for the continuation of their voyage.

The party camped near a large Sahaptian Village, which Sergeant Whitehouse described as: "… in a very pleasant situated place." He wrote: "We encamped near those Indians on the same point of land." Wood was extremely scarce here, as Clark noted on Oct. 17: "no timber of any sort except small willow bushed in sight."

Clark also noted of the landscape in Oct. 16, 1805, "Great quantities of a kind of prickley pares, much worst than any I have before seen, of a tapering form and attach themselves by bunches."

Clark noted the river was "Remarkably clear and crowded with salmon," but was puzzled by the number of dead salmon that lay on the shore and floated in the water. He wrote: "The cause of the immense numbers of dead salmon, I can't account for." Clark was unfamiliar with the spawning cycle of these fish, and many in the party chose not to eat the fish, fearing they were unfit for consumption.

A short side trip upriver

"passed a Island in the middle of the river… great quantities of salmon on scaffolds drying." - William Clark, Oct. 17, 1805.

Upon reaching the Columbia River on October 1805, the corps closed a chapter in geographic speculation that had existed since Father Jacques Marquette's sighting of the Missouri River in 1673. Until Lewis and Clark reached the Columbia, the exact nature of the relationship between the Missouri, which drains the continent's heartland, and the "Great River of the West" (the Columbia River) flowing to the Pacific Ocean, remained a mystery.

Sacajawea State Park now occupies the point formed by the confluence of the two rivers. The park, named in the 1920s, retains the historic spelling of the young Indian woman traveling with the corps - Sacajawea. Today, most historians spell her name "Sacagawea," a convention followed within the interpretive center. The exhibits in the Sacajawea Interpretive Center use this dual spelling as an educational opportunity.

The Lewis and Clark Expedition camped within the present-day park. Although the park does not offer camping to modern visitors, you can stop for a day visit, walk the shores of the Snake and the Columbia rivers, and visit the Sacajawea Interpretive Center to learn about the history of this fascinating location. However, you won't have to watch out for the prickly pear cactus that bothered the members of the expedition - the park is a lush oasis, covered with grass and shady trees.